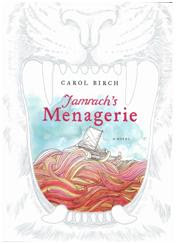 I did post a review of this book on my own blog a couple of days ago, before the short list was announced, but wanted to spend a few days reflecting on this novel before posting here.
I should start off by stating that this is a worthy inclusion to the short list as I was transported by this magnificent novel. Although this is Carol Birch’s 11th novel I must admit I have not come across her work before. If I was to write a recipe card for this book I would start with a dash of Dickens’ London, mix in a smidgin of “Life of Pi”, add a splash of Sarah Hall’s “Electric Michelangelo”, throw in a spice of Melville’s “Moby Dick”, a whiff of A.S. Byatt and a pinch of Peter Carey’s “Oscar and Lucinda” or “Parrot and Olivier in America”…but all of those aforementioned books would only be the spice as this is an original tale. As I read this novel a number of those books or styles were brought to mind, but just as quickly as they sprung into my thoughts they were lost and I was sucked back into this fantastic tale of journeys, friendships, survival and all so lyrically told.
The novel starts in the Dickens “street-urchin” style of London in the 1850’s, with our narrator Jaffy coming to life, as we’re told the tale of the day he was taken into the jaws of a tiger, and as this is written in the first person, we know he must survive. This event in itself sets off his remarkable chain of life events, he meets Jamrach a rare animal trader, works in his yard with the exotic beasts, we learn of his friendship with Tim and Tim’s twin sister Ishbel, his work puts him in contact with seafarer Dan Rymer and finally a decision is made to go to sea on a whaler, with Tim, in search of a dragon. “It was an eastern dragon we were after….not a real dragon”. On board he meets Skip, a young boy who has visions (or is he just insane?)
It is extremely hard to review this novel beyond this high level sketch of events or beyond the commencement of their journey without adding spoilers, which I do not want to do, nor would it do justice to the way Jaffy's story transpires. Great pages of whaling adventures with reality detail of the toil and horror not seen in the Melville style tales, visits to remote islands, weather events and more….
The last 100 pages or so of the novel are gripping and I can assure you that you will not want to put the book down, although I must admit I did feel it went a little flat for 50 or so pages prior to that, and the first person writing in itself does take away some of the tension. But these are minor criticisms of what is surely a contender for the main gong.
A quick flick through to find relevant quotes and I’ve noticed the change in language and style from early sections to latter as the scene, story, mood and events transpire. I’m glad I got one of the short list contenders correct as I did post on my blog that is was “certain to make the short list” and one that I will certainly revisit someday. I've started "The Last Hundred Days" (from the long list) and will finsh that up before I tackle the two I have yet to read from the short list. At this stage Jamrach's Menagerie is my contender for the award, however with Barnes and Edugyan to go I may change my mind.
Posted by Messy_Tony at 3:56 AM