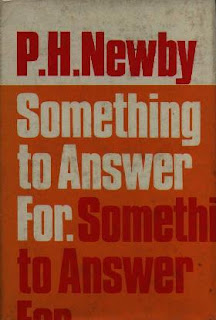 Ok, I'm going to start by blogging Something to Answer For by P.H. Newby because it's the winner of the inaugural Booker, and the pride of my Booker Prize collection. This is what I wrote about it in my journal, back in December 2003....
I paid $225 AUD to read this book! It's the most expensive book I've ever read, like drinking a Penfold's Grange - except that one expects a Grange to be a finer wine than any other, whereas Newby's book is not better than all the other Bookers I've read. It's just a whole lot harder to acquire.
I was so excited when it finally came, all the way from the SA Book Exchange. (That's South Africa, not South Australia.) I was thrilled to hold it in my hands - a slim little hardback, with an orange and white cover in a mildly groovy design, a concession to the Swinging Sixties by Faber and Faber, but it still has a 1950s feel about it, as befits the book trade at that time.
Beware: spoilers

The story has a fifties feel about it too. It's baffling, because it has an unreliable narrator, but the gist of it is that the anti-hero, Townrow, has to skip London because he's been embezzling. His landlady, Mrs Khoury, is the catalyst for his flight, because she thinks her husband has been murdered over in Egypt, and so - both to help her out and also evade the law -Townrow departs, hoping to be richly recompensed for his trouble because Mrs K is rich.
Egypt, however, is in the throes of the Suez Crisis and in the chaos Townrow gets hit on the head in an attack - and thereafter nothing he says can be taken at face value. He says so himself: he mis-remembers things; changes things; gets confused; and deliberately lies. He says this partly depends on circumstances, and it's partly because of the nature of memory.
Newby, however, is interested in more than duplicitous memories. En route to Cairo, Townrow is accused by a Jew who blames Britain for its failure to warn the Jews about the trains to Auschwitz and Buchenwald. His accuser says that the British authorities knew, and chose not to warn the Jews. Townrow reacts with indignation, arguing that one can always trust the British to act with honour, but his subsequent repudiation of this naive response is the main focus of the story...
As events unforld, Townrow encounters various examples of British duplicity, from the incompetence and deceit of their intelligence officers to the betrayal of its own citizens in Port Said. By the time Townrow faces interrogation himself, he tells his inquisitors that he will not answer any quetions about his Egyptian associates because he trusts them at face value but he doesn't trust the British at all.
He decides from this point onward to live life for the moment, taking things at face value. He manages to evacuate not only Mrs K husband's exhumed coffin, but also some nuns and his dubious girlfriend, and then sails off in a boat - to take what comes...
Or so he says. He doesn't really want to face up to three years in gaol for his crime, does he?
I finished reading and journalled this book on 12.12.2003.
Lisa Hill, ANZ LitLovers
Posted by Lisa Hill, ANZ LitLovers at 2:42 AM

Email ThisBlogThis!Share to TwitterShare to FacebookShare to Pinterest
Labels: 1969 - Something to Answer For, Lisa Hill (ANZ LitLovers)