Jackie's Review of 'The Famished Road' 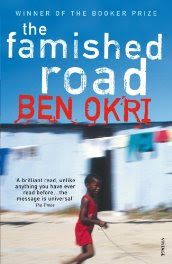 'The Famished Road' is the moving story of African, the spirit child, who is constantly jumping between the two worlds. The spirit world is described so vividly that I was almost convinced it exists!

I know very little about African mythology, and so was worried that I would become lost in this book. There were probably lots of references that I did not pick up on, but at no point did I feel overwhelmed by the plot. In fact I found it very easy to read. Even though it was nearly 600 pages long, it felt like a much shorter book. That said, it is probably not a book to be dipped into casually over a period of time. I think that you need to devote a few large amounts of time, in a short period, in order to immerse yourself in the world.

The characters were well drawn, and I felt real empathy for their plight by the end. The plot was also very well planned, and the moral of the book became hard to ignore as the book came to a close. I loved the book and recommend it to anyone with a large amount of free time on their hands!

Email ThisBlogThis!Share to TwitterShare to FacebookShare to Pinterest
Labels: 1991 - The Famished Road, Jackie