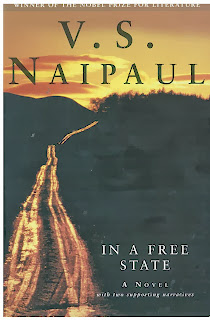 “we all want to be free from something or free to do something. But when you get that particular freedom, whatever it is, do you not find something else that bothers you? When the headache is gone, do we not notice the backache? When the backache is gone, do we not notice that we are irritated at something or someone? We long for freedom, but our small freedoms do not last long! Our natural human angst – restlessness, agitation, discontent, or whatever we label it – kicks in to move us on to looking for the next freedom or the next vista of imagined happiness.”

I know it is probably a tad strange to use a quote from a Buddhist self help manual to introduce a Booker Prize winner, however I couldn’t help myself, given the reference to freedom and that  eternally searching human struggle, when faced with V.S. Naipaul’s Booker Prize winner of 1971.

Not a novel, but a novella with “two supporting narratives”, a prologue and an epilogue.

As mentioned by other reviewers the title novella “In A Free State” is probably the least accessible of the parts here, with a story set in an African colony, no longer British and undergoing a civil war between the King and the President’s tribes. The story centres on a journey of a white civil servant, happy to live in , who has suffered a major nervous breakdown, and his female passenger as they return to the expected safety of their compound. A stop over at a cheap hotel, whereby they meet “The Colonel”, a relic of British rule, brings out the usual arrogance and racism.

The story is thick with descriptions of the landscape, weather, roads and passing landmarks, giving the characters a very insignificant place in the grander scheme of things. With the influence of colonial rule simmering in the background.

Suburban gardens gave way to African urban allotments with fewer trees, and at the edge of the town the land felt open and the light was like the light that announces the nearness of the ocean. Here, serving both town and wilderness, weathered painted hoardings on tall poles showed laughing Africans smoking cigarettes, drinking soft drinks and using sewing machines.

The prologue is a story of a well travelled tramp and his treatment at the hands of German, Greek, Italian, American, Egyptian travellers on a two day steamer journey.

“One out of Many” the tale of an Indian domestic who moves to with his Government employer, a classic Booker tale of displacement.

“Tell Me Who To Kill” the story of a young Caribbean Islander who relocates to to support his younger brother who is the pride of the family. A story of vanity, no yearning for home here but no homeliness in a foreign land.

The epilogue a very short story of a traveller in coming across Italians feeding local children at a roadside café as though they were zoo animals, and a culture clash when he regularly comes across a travelling Chinese circus troupe.

The sum of the whole is numerous characters searching for happiness, for freedom, for a sense of belonging in a foreign land– to be “In a Free State”.

All up a masterful work, but personally not one that resonates with me, with the shallowness of the characters in the main title work being a distraction and a bit of a let down after such promising narratives leading into the main body of the work. Understandable winner of the prize given the themes of displacement and “Britishness”, but not one of my favourites.

Cross posted at my blog.
Posted by Messy_Tony at 6:53 PM

Email ThisBlogThis!Share to TwitterShare to FacebookShare to Pinterest
Labels: 1971- In a Free State, Tonymess