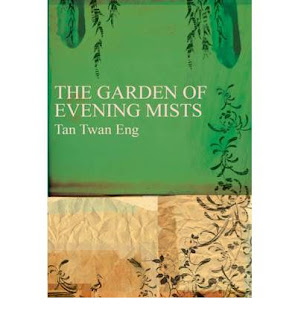 I must admit, gardening is not really my thing, I do appreciate a beautiful garden and I have seen a number of Japanese gardens in my time, obviously without fully appreciating the abstract message being conveyed. This novel is a contemplative one, hence the week or so since I finished it before getting to this review. It was a slow read, only due to the fact that I was letting it slowly sink in, as I’m sure Tan Twan Eng intended.

Set in Malaya in the mountains we have our narrator Yun Ling Teoh returning to the gardens of the evening mist to relive her story of being apprenticed to Nakamura Aritomo, a former gardener of the Emperor of Japan. Judge Teoh is a former war criminals prosecutor who had spent time in a Japanese prisoner of war camp, where her sister perished. She despises the Japanese for those atrocities but at the same time her story of her relationship with Aritomo and her wish of building a garden for her sister’s memory is slowly drip fed to us. Her time working Aritomo’s garden (Yugiri) and her relationship with the gardener and the locals is revealed slowly through the mists of her recollections.

At each turn in the path, Aritomo drew my attention to an arrangement of rocks, an unusual sculpture, or a stone lantern. They looked as if they had been lying there on the beds of moss and ferns for centuries. ‘These objects signal to the traveller that he is entering another layer of his journey,’ he said. ‘They tell him to stop and gather his thoughts, to savour the view.’

And our story unfolds in this manner, long winding passages with detailed descriptions of leaves, or clouds and then the occasional blooming of Judge Teoh’s story, we as readers have entered another layer of our journey. Although you could simply follow the narrative plot here this is a multi layered novel one that slowly encompasses “the art of setting stones” and a miniature view of a much broader landscape. We do have tea ceremonies, Buddhist references, raked sand to represent various elements, holes in hedges to focus your attention and more. All sub plots to the main story by our  narrator, who is losing her memory but revealing her story to us at the same time. A story which contains local terrorists, tea growers, tribes who harvest bat nests (for soup), kamikaze pilots and a mystery of hidden Japanese war wealth.

Despite my fears of a CT attack, I enjoyed living on my own again, in these mountains where the breath of trees turned to mists, where the mists entered the clouds and fell to earth again as rain, where the rain was absorbed by the roots deep in the earth and drawn out as vapour again by the leaves a hundred feet above the ground. The days here opened from beyond one set of mountains and ended behind another, and I came to think of Yugiri as a place lodged somewhere in a crease between daybreak and sunset.

This is a beautifully styled novel and as I mentioned before one that I allowed to slowly sink into my conscience. Judge Teoh’s life and the journey through war camps, through varied relationships and her attachment to Japanese gardens as well as woodblock prints and tattoo was not a journey I could quickly skim through. Personally I could understand frustration at a number of reader’s hands and if Japanese gardens, meditation and slow awareness is not your thing then this would probably infuriate you no end.

Overall a very enjoyable novel which taught me a great deal about Japanese gardening, post war Malaya as well as narrative style. A worthy inclusion to the Booker Shortlist.

Cross posted at my blog.
Posted by Messy_Tony at 2:01 AM