Tony Messenger - 2012 Shortlist - Umbrella - Will Self 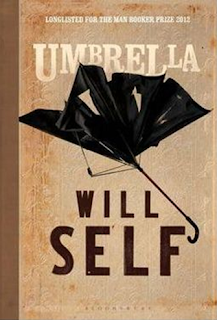 Where to start? Where to start? At the beginning? An epigram by James Joyce, well that’s the start isn’t it? Gives it away? Probably the easiest part of the book to read. A journey – rugged, with traps and snares galore, across 90 years. NINETY TWO to be exact. Covering Dr Zack Busner’s work with mental patients. More specifically a mental patient called Audrey Death. Death, De’Ath (something like that I can’t remember and can’t find it – how could you when the novel is 397 – THREE HUNDRED AND NINETY SEVEN – pages, PAYYY JEZZZ, long and there are no chapters, only paragraphs that go for 26 pages at a time, well not all of them but more than most. Oops forgot linear structure, no problems this book doesn’t have any, only reason I know it goes for ninety two years is the précis inside the front cover, a nice brown one too, just like the quick brown fox jumping over a lazy dog, no dogs in the war, or were there? Not sure, things can get frightfully muddled in the trenches, especially when your sister is working in an arsenal making the munitions – MOO NISCH ONS – that’s my sister Audrey. Gets encephalitis lethargica you know, that’s a sleeping sickness of the mind. What do you do with people who get that? Put them in a mental hospital of course, with others who have it too. Use an umbrella to keep the rain off, or as an insider’s term for the treatment.

Get the um-brella, Doctor! Get the umbrella! Which is a euphemism he knows to be widespread among the staff, and which he abhors. – Eeeerarrr’rrra’rrra -!

Had to put a quote in – always do – sometimes more than one, probably a good idea to put another one in, why not three short ones, gives the same idea

her brain…it’s outside of time…so far away…in another place… in another phase of development, Willis said when they all pitched up that morning.

told the psychiatrist he had experienced it as a continuous present, an awful and unchanging Now?

He knows – and understands also that using net curtains to guard against your privacy is as futile, surely, as employing tenses to divide time?

Did I mention we follow a Doctor? He treats these patients, tries to find a cure, manages to get a few of them awake, in retrospect of course, there’s no such thing as time in this novel, only give away are the lines from songs thown in every now and then. Sing along songs of WW1 days (World War One, the Great War, the war to end all wars, that one), pop tunes of the 70’s (who’s an ape-man? I’m an ape-man, I’m an ape ape man, I’m a ape-man….oops done it again, opening sentence given away) Italics would be useful, help you break up your thoughts – not that things would stay the same even mid senten

Chop and change, here we go ‘round the mulberry bush…the mulberry bush, could make sense and probably does if you have a repetitive mental illness where time has stood still. Especially working in a repetitive job, working a lathe, or making umbrellas (there they are again – what do they mean?). Have to red this again, can I do it? They’ll be reading this one for years, studying it in universities – YOU – KNEE – VERR – CITY – they will you know. Will win the prize, I’m confident of that, a standout book, one that’s the most challenging of reads, one that will infuriate about 92% of readers (that means 8% will read it right through– you know how it works 100% less the ninety two who didn’t finish it – hey there’s that NINETY TWO number again, could that mean anything?)

Will Self is credited with the following quotes – and as we know quotes from the web are always true -  "I don't write fiction for people to identify with and I don't write a picture of the world they can recognise. I write to astonish people.”,  "What excites me is to disturb the reader's fundamental assumptions. I want to make them feel that certain categories within which they are used to perceiving the world are unstable."  He’s achieved that here – a heroic, challenging but ultimately very rewarding novel, just don’t expect it to be easy. For me the absolute standout of the year’s shortlist of the ones I’ve finished to date.

PS – Just in case there are one or two of the 92% out there, this review is a poorly written parody - PARRROOOOODEEEE

Cross posted at my blog.
Posted by Messy_Tony at 7:14 AM