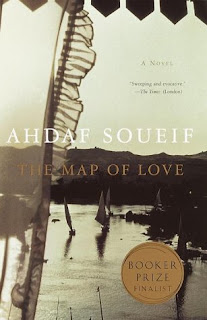 *I know I have been silent for some months - we recently welcomed our first child!  I promise that I have been reading, but I have a lot of writing catch-up to do, as I was very tired throughout the last trimester.  Now that I am on maternity leave, I am hoping to catch up on posts while the baby is sleeping.*

The Map of Love, by Ahdaf Soueif, was a decent attempt at an epic multi-generational love story, that fell flat for me.  While I thought it was a nice story, I never really got drawn in, and a few of the author's loose ends or bizarre, unexpected and ultimately dropped plots ended up irking me long after the novel was finished.

In the present day, a young American woman, Isabel, has become smitten with the older Egyptian-American conductor, Omar.  In an attempt to become closer to him, and to learn more about her own Egyptian roots, Isabel visits Omar's sister in Egypt.  There, the two unravel the story of Isabel's ancestor, the Englishwoman Anna Winterbourne, who falls in love with Sharif al-Barodi in Egypt in 1901.  Somewhat coincidentally, Anna's lover's sister is an ancestor of Omar.  (Did you keep that straight?  There is a very useful family tree on the front sheets of the novel that I had to refer to frequently...).  And it gets even more confusing, as a subplot involving possible incest is put forward and then dropped almost casually, without adequate resolution.

While I found the story of Anna and Sharif to be interesting and at times poetic, it never felt very plausible.  I'm not one for love at first sight stories - if you want me to believe that two people fell in love in the space of one or two shared moments, they had better be pretty magical moments.  I was never convinced that Anna and Sharif had the emotional compulsion that would have been necessary to enter into their bi-cultural marriage.  The characters were just too flat.  Also, in an attempt to place their romance in the context of the greater political reality, their story dragged through the middle of the book, and I lost interest in the romance and started to wonder when we were going to get to the climactic death (this being the downside of the family tree, with birth and death dates for every character).

Also implausible were the ways in which the characters in the present-day narrative were all related to and interconnected with each other.  I found it highly unlikely that Isabelle would fall in love with a famous Egyptian-American in New York City who also happened to be her distant cousin, and who also knew her mother in New York many decades earlier, unbeknownst to Isabelle.  And the situation was not helped by the fact that these characters suffered from the same two-dimensional limitations as the historic ones.  Perhaps in an attempt to explain these coincidences, Soueif mixes in some magical realism elements in the eleventh hour of the story, which was totally out of place and only served to muddle the story line.

This review seems harsh - despite the narrative problems, I enjoyed reading the book.  There were, for example, some really lovely descriptions of family life in Egypt at the turn of the century.  It just didn't sit well with me once it was over.